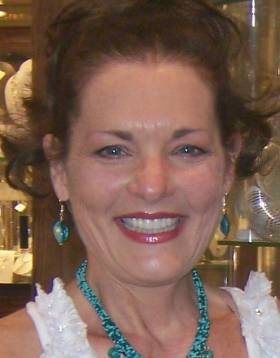 Lynell Tobler just wanted to learn about the flora and fauna of her new home town. A Californian born and raised, Lynell could describe in great detail the species of plants and animals indigenous to the west coast and the Sierra Nevada mountain range, but when she moved to Baltimore County in 2001, she was bewildered by bushes, vines and trees she did not recognize, blue jays and squirrels with different markings than she was used to, and unusual wildflowers she could not name.

One day in 2003 Lynell stopped by the visitor center at Soldiers Delight Natural Environment Area to ask about plants in her yard she could not identify. The ranger on duty at the time gave her a tour of the nature center’s private aviary, where unreleasable raptors and other animals are employed as ambassadors in Patapsco Valley State Park’s Scales & Tales program. There was a bald eagle, our national symbol and a magnificent creature, and many beautiful hawks and owls. The ranger explained that these splendid animals were now confined to a life in captivity because most of them had sustained debilitating injuries from being hit by cars, typically the result of people littering from their automobile windows. Lynell’s interest was piqued.

The ranger invited Lynell to learn about east coast nature by donating her time as a “front desk volunteer”, spending a few hours on occasional weekends staffing the visitor center at Soldiers Delight. It seemed a perfect way to provide service to a charitable cause and get an education about local wildlife and botany at the same time.

After about a year, the Soldiers Delight Conservation, Inc. board president at the time, Don Domain, wandered into the visitor center while Lynell was working her volunteer shift at SDNEA. Don invited Lynell to join the SDCI board of directors, which serves as the Friends group for the area. Lynell came to a board meeting and was intrigued. A few meetings later, Lynell was voted onto the board, and a few years after that was voted into the role of vice president, where she has spent her time since supporting board president Laura Van Scoyoc and facilitating decisions made by the board.

“I see myself as an “action person,” Lynell says. “Laura is the one with an incredible vision for making Soldiers Delight a truly enlightened educational facility which highlights our critical need to preserve and showcase the unique and diverse ecosystem for which the serpentine barrens is known. I am more of a “get-it-done” kind of gal. Give me a task (or ten) and I will see to it that it gets done in a timely manner.”

When Lynell is not volunteering at Soldiers Delight or serving on its board, she works as a paralegal for a national law firm, conducting research at the Library of Congress and writing for the company website.

It wasn’t too long after Lynell joined the SDCI board of directors that she saw an opportunity for combining her volunteer work at SDNEA with fundraising opportunities for SDCI. Now she leads several such events each year in her dual roles as SDCI vice president and volunteer ranger for the Maryland Park Service.

The Sunday before Easter, Lynell can always be found in the auditorium at the Soldiers Delight visitor center, leading a two-hour program which shows participants how to dye eggs using only natural ingredients such as parsley, onion skins, turmeric, fresh beets and red cabbage. On the Saturday before Halloween, Lynell leads a pumpkin-carving program at the visitor center, providing a family-friendly venue for parents and children to spend quality time creating ghoulish goblins and fanciful faces out of the seasonal gourd. And the first Sunday in December is when you’ll find Lynell conducting an elaborate craft workshop in our auditorium, which she puts on in conjunction with a holiday open house and bake sale that SDCI hosts on that day to show the public all the wonderful attributes that make Soldiers Delight such a unique and incredible place.