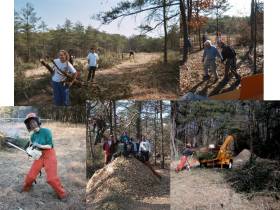 Restoration of the serpentine ecosystem at Soldiers Delight Natural Environment Area in Owings Mills, Maryland, began in 1989 as a six-year research phase. Three research areas were selected to verify the expected response of indigenous vegetation to the clearing and clearing-and-burning of Virginia pine-invaded areas. In addition, the research areas were closely monitored for unexpected outcomes, especially invasive species.

To minimize environmental impacts, Virginia pines were cleared manually during the dormant season (November – March). After being chain-sawed by contractors and qualified volunteers, cut pines were dragged by a line(s) of volunteers to a wood chipper stationed in an environmentally safe location. Wood chips were concentrated in a pile and left for natural decomposition. Half of the cleared areas were then burned during November of the following year, after the first hard freeze. Spring burning was not tested since historical fires were autumnal (Marye 1955).

As predicted by previous research in Midwestern prairies and savannas, vegetation recovery in cleared-and-burned areas was quick and robust and without harm to rare and endangered species populations. In contrast, plants in areas which were only cleared generally increased in growth or distribution, but not to levels in cleared-and-burned areas. Results for 1989–1992 can be found in Tyndall (1994), and for 1993-1994 in Tyndall (2020). In addition, invasive species were not uncovered or introduced by clearing and burning.

After the research phase, the Serpentine Ecosystem Restoration Program (SERP) was initiated in 1995 as part of the management plan for the entire Soldiers Delight Natural Environment Area. Based on research results, the long-term strategy was manual removal of pines during winter followed by prescribed burning in fall after the first hard freeze. Spring burning was also later implemented in some greenbrier-dense areas under certain conditions. 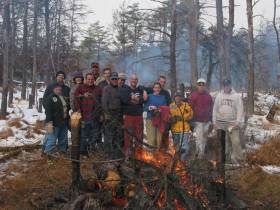 Funding for chain-sawing pines in habitat of the Federally Endangered Sandplain gerardia was provided by the U. S. Fish and Wildlife Service. Volunteers with expert training and proven experience cut Virginia pines in areas without this endangered species. A Volunteer Coordinator of the Maryland Natural Heritage Program would then organize regular events for volunteers to drag cut pines to a stationed chipper during winter. Logs, too large for the chipper, were stacked in small piles and burned after a snowfall. 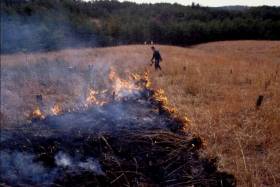 Areas cleared of pine were then prioritized for fall burning, based mainly on the number and quality of rare and endangered species populations. Prescribed burns were led by the Natural Heritage Program with assistance from the Maryland Forest Service, Maryland Park Service, and The Nature Conservancy.

Beginning in 1999, the prescribed burn effort was boosted substantially by the fire management program of Blackwater National Wildlife Refuge, U. S. Fish and Wildlife Service.  Their contribution more than quadrupled the number of acres burned annually. 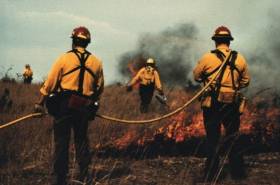 By 2020, more than 500 acres at Soldiers Delight had been cleared of pine, and more than 100 acres had been burned at least once. The rate of prescribed burning lagged behind clearing mainly because of smoke management limitations in a suburban landscape. Pines in remaining areas are too large for manual removal or are embedded in dense greenbrier, or both. SERP continues to hold regular volunteer events mainly to cut reinvading pines, prepare firebreaks for prescribed burning, and to help manage invasive species.

Much work has been done, yet suburbia, and the multitudes of invasive landscaping plants it harbors, continues to threaten our beloved site. Chinese silvergrass, Japanese barberry, wavy-leaf basketgrass and several other species continue to encroach, and time is short.

Come add your elbow grease to our worthy cause. Pitch in to help us in our Serpentine Ecosystem Restoration program, known as SERP, usually scheduled two weekend days per month from December through March.

For more information, contact us or send an email to , outreach ecologist and SERP volunteer coordinator for the Maryland Department of Natural Resources Wildlife and Heritage Service.