SDCI Staff, August 20, 2019
It was a beautiful (albeit very warm) summer Saturday in August. Puffy white clouds floated across a deep blue sky as the friends and family of retired Baltimore County Planner Les Graef gathered at a picnic shelter along a winding, tree-lined lane well inside the entrance gates to the McKeldin Area of Patapsco Valley State Park in rural Marriottsville, Maryland. The happy occasion was organized by Les’s family to celebrate his 95th year on this planet. But there was more to the occasion than the acknowledgment of a milestone birthday.

While his own two sons were growing up and well beyond, Les Graef served as “trip coordinator” for Boy Scout Troop 742 of the Dulaney District in Providence, Maryland. During his more than forty years of volunteer service to the Scouts, Les is estimated to have organized and led more than 400 once-monthly campouts and other excursions to various cultural and wilderness sites along the eastern seaboard and inland to the mountains. Along the way, Les became a loving father-figure and mentor to many boys, several of whom grew up to launch nature-oriented careers with the Maryland Park Service.

One such young man is Jamie Petrucci, whose deep and abiding love for Les Graef has spanned many decades. In 2007, Jamie took a job with the Maryland Department of Natural Resources and since 2012 has been a Ranger at Patapsco Valley State Park. It was Jamie who suggested to PVSP manager Rob Dyke that the agency use the occasion of Les’s 95th birthday to commemorate Les’s significant contribution to the Maryland Park Service and the conservation of the Soldiers Delight habitat.

For it was Les Graef, you see, who spent his career as a Baltimore County planner. It was Les Graef who was assigned by Baltimore County's Planning and Zoning Committee in 1963 to draw up plans that would eventually become Soldiers Delight Natural Environment Area in Owings Mills, Maryland. The committee had previously recommended acquisition of the scrubby stretch of land in Owings Mills for a nature preserve, spurred on by an earnest band of committed conservationists who saw the area’s environmental importance.

By the late 1950s it had become clear to the small but dedicated group, who called themselves the Citizens' Committee for Soldiers Delight, that the postwar suburbanization of Owings Mills was slated for even more extensive development by the County of Baltimore. This devoted posse of environmentalists consisted of nature advocate Jean Reese Worthley of Maryland Public Television’s Hodge Podge Lodge fame, her University of Maryland botanist husband Elmer Worthley, Johns Hopkins University astronomer William Fastie and his wife, Frances, and political activist Florence Rogers, among others. These early founders of Soldiers Delight Conservation, Inc., which was officially formed in 1965, knew they would have to take action if the area was going to be preserved. 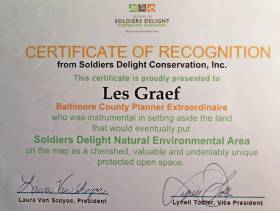 At the group’s urging, the Owings Mills Recreation Council voted unanimously in 1959 to approach Baltimore County about protecting the land from development. In 1963 Les Graef went to work on plans to have hundreds of acres of serpentine barrens set aside as a nature preserve, plans that were eventually approved in 1968.

The early founders of SDCI, which operates as the Soldiers Delight Friends Group, recognized the value of preserving as a state-mandated wilderness this desolate-looking ribbon of shallow-soiled countryside on which several rare and endangered species of plants and animals (think wildflowers and butterflies) make their home. The preserve is now called Soldiers Delight Natural Environment Area. It is overseen by Patapsco Valley State Park.

Well aware of Les Graef’s significant contribution to the preservation of this natural habitat within Baltmore County, Jamie reserved a lovely picnic shelter for Les’s birthday fete at the nearby McKeldin Area of PVSP and invited several childhood friends, who were also mentored by Les, to attend his party. Les knew he was attending a family picnic on Sunday, August 17. What he didn’t know was that the Maryland Park Service would surprise him with a plaque for his dedication in getting Soldiers Delight set aside as a nature preserve so many years ago.

As family and friends filled plates with fried chicken and an assortment of tasty salads, several men gathered to pay tribute to the Boy Scout leader who served as both cherished mentor and father-figure during their formative years. In addition to Jamie, young Greg Certeza eventually grew up to launch a career with the Maryland Park Service, starting in 1992 as a striped-bass stock-assessor in the agency’s Fisheries Division. Now, Greg serves proudly as a sergeant with the Maryland Natural Resources Police. Another young scout, Dave Goshorn, has worked for the Maryland Department of Natural Resources since 2016 as its Bay Restoration Coordinator.

After everyone sat down to eat with picturesque Liberty Reservoir dam and spillway visible in the distance, Assistant Patapsco Valley State Park manager Joe Vogelpohl stood up to present Les Graef with a beautifully engraved plaque declaring Les an Honorary Ranger. Les was given an “honorary ranger” hat, as well. It was a touching tribute to a beloved man. Les was visibly moved by the recognition.

Then, on behalf of SDCI, Vice President Lynell Tobler presented Les with a certificate of appreciation for his steadfast dedication to making Soldiers Delight NEA a reality during a time when many county officials, state politicians and even some nearby residents did not have the foresight to comprehend the environmental value of the habitat’s unique ecosystem.

None of the wilderness area, for which SDCI continues to serve as proud gatekeeper, would ever have been set aside with permanent state protection had it not been for the considerable efforts of County Planner Les Graef. Happy 95th birthday, Les! We wish you many more.