National Night Out For SDCI! 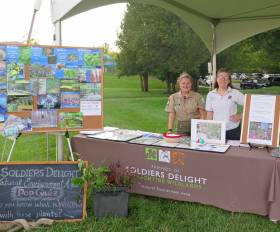 It seems like it has been ages since SDCI has been able to attend a public event and present our display that introduces people to the wondrous features of Soldiers Delight Natural Environment Area in Owings Mills. And it has been a while!  With the coronavirus pandemic curtailing almost all public events for more than a year, SDCI President Laura Van Scoyoc and Vice President Lynell Tobler were more than ready to present the many attributes of this special place to the public once again.

The weather could not have been better for National Night Out which, since 1984, has designated the first Tuesday in August as a day for communities to come together in fellowship, to get acquainted with their police departments, with the local business community, and with their neighbors. There was no official tally of attendees this year, but it was clear that hundreds of residents emerged from their homes to enjoy the camaraderie of simply "being together" with one another. 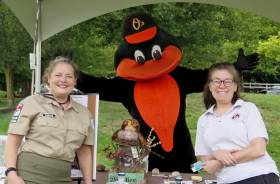 SDCI offered lots of fun at our booth this year. There were samples of chromite ore, calsite, soapstone, magnesite, serpentine rock and other mineral samples to pick up and examine, all examples of the prehistoric geological makeup of the serpentine barrens, a winding stretch of fascinating strata that stretches from Nova Scotia to Alabama. And there were games to play! The SDCI booth offered candy to anyone who could tell us why certain plants in our display were "bad". Children could engage with our "cootie catchers", a form of origami in which folded paper is labeled with images or messages from which a player chooses, and on the inside are eight flaps, each concealing another hidden picture or secret message. It's no surprise that our images depict the wide variety of rare and endangered butterflies and plants that inhabit Soldiers Delight. We had lots of visitors to our booth throughout the evening, including the Oriole's baseball team mascot, who seemed genuinely interested in making friends with our "owl" donation box. 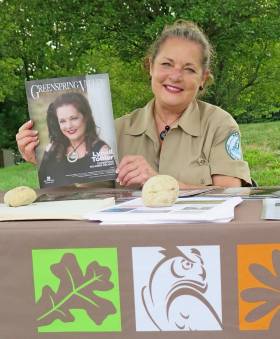 Lynell was especially excited to show off copies of Greenspring Valley Neighbors. She is featured as the cover story in the August 2021 issue, which highlights her work to help conserve the fragile ecosystem at Soldiers Delight for future generations. 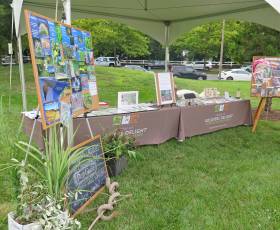 Our display was not all fun and games, however. Probably the single most important outreach message we impart at Soldiers Delight Conservation, Inc., is to implore neighboring residents to purchase only native plants with which to landscape their yards. The dangers of planting non-native, invasive species of plants, vines, shrubs, flowers and trees, many of which can be purchased at any local garden center or big box store, cannot be overstated. To our target audience, the homeowners in the Owings Mills New Towne community whose properties are near or adjacent to the Soldiers Delight wilderness, our message is especially urgent: the seeds from common but terribly invasive ornamentals, groundcovers and landscape specimens, several of which we displayed at our booth, are eaten (and later expelled) by birds, caught in animal fur, and carried on the wind out of neighborhood yards and into Soldiers Delight NEA and other wildlands, where they sprout and spread with abandon. 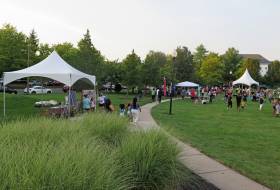 The Owings Mills New Town neighborhood common area, known to locals as "Central Park", was filled with happy residents enjoying various booths offering free food from area restaurants. There were also demonstrations by local businesses and fire and police departments, and raffles for hover boards and other coveted prizes. Our SDCI display saw a steady stream of neighborhood families for the full two hours of the event. As dance music wafted from a nearby stage and families munched happily on local restaurant fare, it was clear that the Owings Mills New Towne Community Association’s National Night Out event was a success. SDCI was certainly happy to be invited back this year.