Origin and Geology of Soldiers Delight 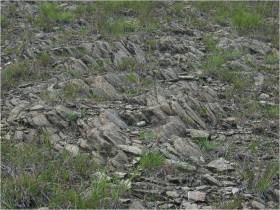 Soldiers Delight probably originated from the upper mantle of the Earth, during convergence of an ancient oceanic plate with the continental plate which preceded North America, called Laurentia.  It is part of a large fragment of an oceanic plate which was thrust upon the edge of Laurentia during the collision, becoming part of the continent.  This fragment of the oceanic plate, termed ophiolite (“snake stone”), consists of crust and underlying upper mantle.  Based on current science, Soldiers Delight is from the upper mantle part of the ophiolite.  This ophiolite, named the Baltimore Mafic Complex, formed during development of the Appalachian Mountains more than 450 million years ago, about 200 million years before the Age of Dinosaurs.

Discussion:  Tectonic plates are large sections of the outermost shell of the Earth comprised of crust and adjoining upper mantle, collectively called lithosphere (Alexander et al. 2007).  Oceanic plates are heavier than continental plates and, therefore, almost always slide under (subduct) continental plates during the Wilson Cycle.  Infrequently, however, a fragment of an oceanic plate is thrust onto the margin of a colliding continental plate and is called an ophiolite (“snake stone”).  During the past 500 million years, less than 0.001 % of the crust generated at mid-oceanic ridges, worldwide, has been incorporated into continental margins.  None of the Atlantic Ocean lithosphere has been incorporated into any continental margin during the last 160 million years (Dilek 2003).

Although some ophiolites are preserved in their original condition, the Baltimore Mafic Complex became very fragmented over the span of hundreds of millions of years.  Soldiers Delight originated from upper mantle in one of the dismembered portions of this complex (Guice et al. 2021).  Upper mantle is comprised of ultramafic rocks; i.e., rocks high in magnesium and iron (Alexander et al.  2007, 2009).  Soldiers Delight is serpentinite (serpentine rock) which formed from one of these ultramafic rocks, peridotite (Alexander et al. 2009).  That is, the minerals that formed peridotite (olivine and pyroxenes) were changed to serpentinite minerals (antigorite, chrysotile, and lizardtite) by certain elevated temperatures in the presence of water, such as seawater.  (Magnetite is also produced from the parent rock.)  Serpentinite is still ultramafic because Mg was not lost during metamorphosis.  However, Ca was lost during the conversion to serpentine, leaving serpentine rock and derivative soil with very high Mg:Ca ratios, with dramatic consequences to plant life as discussed in subsequent sections.  Based on five samples from three locations studied by Guice et al. (2021), the parent ultramafic rock of Soldiers Delight has been transformed to serpentine rock with a Mg:Ca ratio of about 6:1.  Most plants grow best at a Mg:Ca ratio of about 1:1, and the average ratio of Mg:Ca on continents is about 0.7 (Alexander et al. 2007).

Ophiolites have generated many geologic studies since they contain portions of the Earth too deep to reach by exploratory drills.  They have been invaluable in understanding the complex geologic history of different parts of the Earth.  In addition, they have contributed to the development of plate tectonic theory as the presence of oceanic rock on continents could not be explained by earlier theories.  Types of ophiolites are discussed and diagrammed in Dilek and Furnes (2011), and evolution of the concept is presented in Dilek (2003).  The Baltimore Mafic Complex has recently been interpreted as a suprasubduction zone type of ophiolite, meaning that the rocks formed in association with a continental margin, rather than a mid-ocean ridge (Guice et al. 2021).

The distribution of ultramafic rocks within the Appalachian Mountains is diagrammed in Rajakaruna et al. (2009).  It should be noted that not all ultramafic rocks are associated with ophiolites, and the origin of many ophiolites remains unknown or debated, especially in the central and southern Appalachians (Guice, personal communication, January 2022).