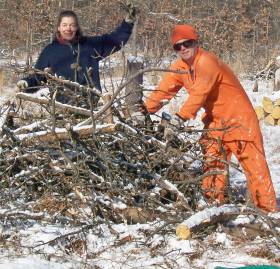 The main goal of the Serpentine Ecosystem Restoration Program (SERP) is to restore the Soldiers Delight Natural Environment Area (SDNEA) in Owings Mills to its pre-European settlement habitat of native oak savanna (also known as a serpentine barren). During European colonization of the area, the natural cycle of fire from lightning strikes and native American hunting techniques was suppressed, causing the once-plentiful scrub oaks, tall grasses and wildflowers of the oak savanna to give way to other plant species. Our restoration efforts include reintroducing the process of fire in the form of prescribed burns. We manually remove plant species that took root when the fire culture was interrupted, including fire-intolerant Virginia pine, eastern red cedar and greenbrier.

Our SERP coordinator, Maryland's Wildlife and Heritage Service biologist Paula Becker, leads a series of all-volunteer SERP events on alternating Sundays through December, January, February and March each year. At each event, a different area of concern is addressed, so the day's activities are always diverse and interesting. Volunteers might help in clearing and creating firebreaks, or drag, chip and burn Virginia pine, or mark invasive species for later eradication.

This year, Paula scheduled eight restoration days: four large group events on the first Sundays of each month, and four small group-with-power-tools events on the third Sundays. Thanks to the flexibility of her hardy volunteers in the face of unpredictable weather, they managed to make seven of those eight days, which was a huge  improvement over last year, when only three days worked out of eight days scheduled.

All tolled, 32 individuals donated 393 hours toward conservation of the Soldiers Delight  ecosystem this round. Happily, there were some new folks this season to boost Paula's  crack team of regulars. She also added some Master Naturalists to the ranks. Paula called her SERPers a "pretty amazing bunch", reflecting that so many Virginia pine and red cedar trees were cleared that she lost count, promising to bring a clicker-counter next year.

Paula extended extra thanks to the president of Soldiers Delight Conservation, Inc., Laura Van Scoyoc, for picking up the slack when Paula suffered a serious ankle sprain. She also thanked Maryland Ecologist Wayne Tyndall for leading the group.

Since the Serpentine Ecosystem Restoration Project began in 1995, hearty volunteers have logged more than 30,000 hours toward the restoration of Soldiers Delight's unusual and biologically diverse ecosystem. It could not be done without our many dedicated volunteers. SDCI would like to also publicly salute Paula Becker for her many years of dedication to this unique ecosystem.

Finally, Paula wants everybody to remember: If you are ever looking for an ideal way to work off some holiday pounds, get a good workout in the great outdoors, earn Service Learning Hours, or do significant good in service of conservation, participating in a SERP event is a wonderful way to make a tangible difference in a sensitive, unique and wonderful natural environment.

Questions or to sign up for an upcoming SERP event? Call SERP Volunteer Coordinator Paula Becker at 410-260-8568 or email her at paula.becker@maryland.gov.