On Saturday night, Soldiers Delight Conservation, Inc, the Friends group for Soldiers Delight Conservation, Inc., held its annual pumpkin-carving fundraiser for Soldiers Delight Natural Environment Area, an exquisite but fragile ecosystem that is constantly threatened with being overtaken by invasive vegetation. Our fundraisers seek to supplement the Maryland Wildlife and Heritage Department's Serpentine Ecosystem Restoration Program with badly needed financing to help rout out invasive species-- plus this event is always loads of fun! 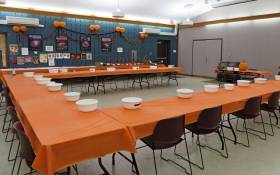 Our vice president, Lynell Tobler, and longtime Soldiers Delight volunteer, Jesse Turner, spent several hours Saturday morning transforming the auditorium at the Soldiers Delight Visitor Center into a veritable pumpkin-carving paradise, complete with stencil patterns, design ideas, carving utensils and even candles for the grand finalé. Who wouldn't want to carve a pumpkin in a place where you didn't have to worry about cleaning up the mess afterward? 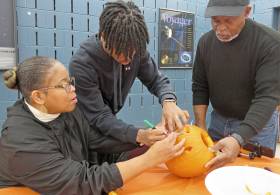 Busy families got right to work choosing a pattern, transferring the design to their gourd and carving their jack-o-lanterns. Pictured are Patricia and Dale Houston of Pikesville with their 16-year-old son, Jeremiah. Jeremiah is donating his service-learning hours this school-year to conservation efforts at Soldiers Delight by creating tweets, Facebook posts and YouTube videos for and about the habitat and our conservation efforts. He took lots of photos and video-footage of our fundraiser and intends to make a short film for SDCI. He is quite a talented young man! 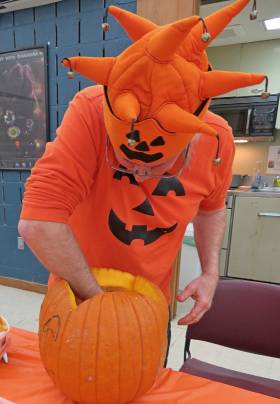 Volunteer Jesse Turner wore a pumpkin-themed hat and shirt to carve his jack-o-lantern. Jesse has been volunteering with SDCI for almost 20 years! We appreciate his efforts very much. 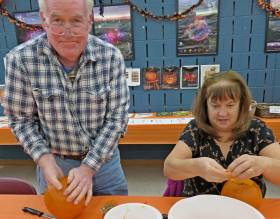 Fraser and Suzie Bishop, from Finksburg, Maryland, hadn't carved pumpkins in ages, but they certainly got into the spirit of the occasion! Back in the 1980s, Fraser was the ranger in charge of Soldiers Delight. He was a loyal and fierce protector of Soldiers Delight's rare species for many years. 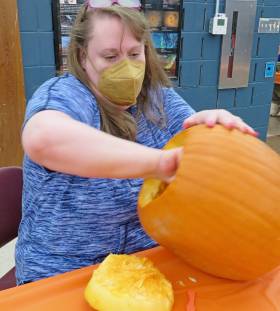 SDCI Board member Melissa Schehlein wanted her front porch greeter to encourage everyone to vote in the upcoming election. A diehard conservationist, Melissa heads SDCI's social media outreach and is a talented crochetier. 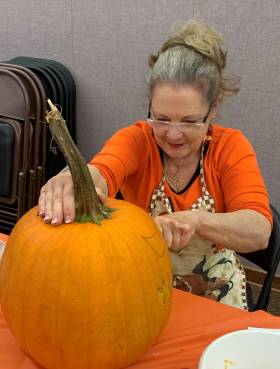 SDCI vice president Lynell Tobler helmed the event, carving a fierce face into her pumpkin. Lynell has served on the SDCI board of directors since 2004 and has been its vice president since 2007.

After dark, we took our jack-o-lanterns outside and photographed them in all their glowing wonder. Although not as large a turnout as we'd hoped for, our fundraising event was an absolute blast. All lovers and patrons of Soldiers Delight, the happy participants carved pumpkins, made new friends, and shared a wonderful evening together.