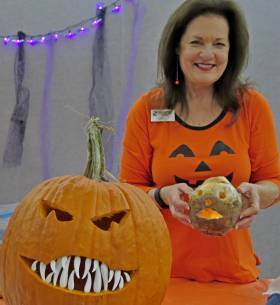 The Saturday before Halloween offered a delightful crispness to the air. What had been a muggy, unseasonably warm weather pattern gave way to autumn chill just in the nick of time, as the board members at Soldiers Delight Conservation, Inc. put the finishing touches on our pumpkin-carving event at the Soldiers Delight Natural Environment Area's visitor center in Owings Mills. We wanted to feel a nip in the air on the night of our annual fundraiser -- and we did! 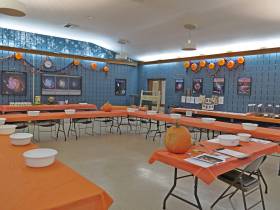 That morning, SDCI vice president Lynell Tobler rose early to load her car with supplies. Once the provisions had been stacked in the visitor center auditorium, Lynell set to work outfitting the room for what is arguably our favorite event, the carving of pumpkins for a cause -- to raise funds for our much needed conservation and restoration efforts at Soldiers Delight NEA. 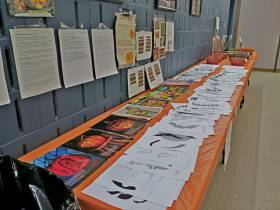 Long banks of tables were arranged in a horseshoe pattern, with bowls set out to accommodate the inevitable extraction of pumpkin innards. Walls were swagged with seasonal balloons and streamers in orange and purple and black. One table held an urn of hot spiced cider and small bottles of water. Another held a cake honoring our president, Laura Van Scoyoc, whose birthday happens to fall near Halloween. Between these edible offerings, Lynell placed a bowl of shrunken apple heads protruding from wooden sticks and moss, and blacklit by color-changing LED lights from within the cauldron's depths. 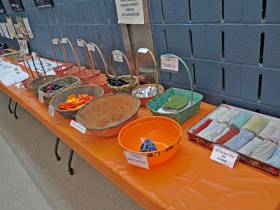 On a table along a side wall, paper carving patterns ranging from innocent and funny to spooky and gruesome, with everything in between, were spread out across the orange table covering to give participants design ideas and guide them in their cutting. Instructions for first-time carvers were fastened to the walls. 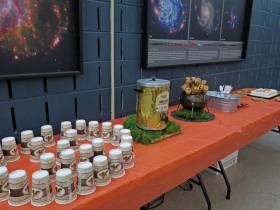 On another table, baskets filled with every imaginable implement sat at the ready: scissors for cutting a pattern to size, scotch tape to hold patterns in place on the pumpkin, marking pens for drawing one's own design, pokers for pricking a pattern through paper onto the pumpkin's surface, scoops for scraping out the, well, you know, and knives and serrated saws of all shapes and sizes for carving the spooky face of one's nightmares. With trays full of moistened, rolled-up washcloths for cleaning the sticky innards from fingers and arms, Lynell's tableau was complete. 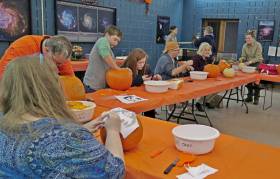 At 6:00 p.m. participants began to arrive. Our volunteer crew was ready! After board secretary Jason Domasky checked them in, carvers chose their patterns and got busy creating festive and freaky jack-o-lanterns, as board member Melissa Schehlein and volunteer Jesse Turner assisted. In one corner of the room, Patapsco Valley State Park seasonal naturalists Katie Crane and Courtney Birkmeyer held forth with a couple of ambassadors from the PVSP Scales & Tales program, a majestic great horned owl, who serenaded us all evening with his haunting "Hoot Hoot Hoot", and a large black rat snake who willingly coiled himself around the arms of the naturalists as they showed him off to visitors. 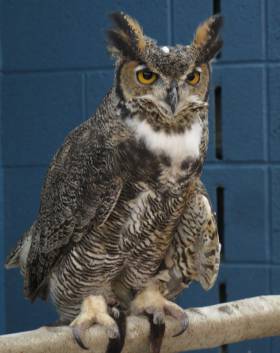 Once pumpkin carving was fully underway, Lynell gave a short history of the origin of pumpkin carving and told a sordid tale of intrigue and betrayal to explain how the lighting of jack-o-lanterns became customary in the Irish countryside on Halloween. Lynell showed off a hollowed-out turnip, carved that morning by Jesse, and  explained that there were no pumpkins in Ireland when the tradition began, so turnips were used. 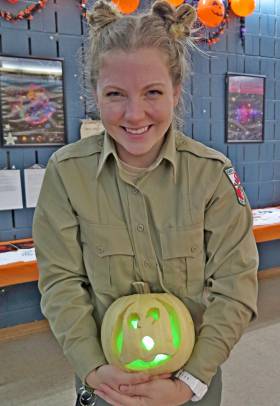 After fanciful faces had emerged from the gourds, we turned down the lights and put candles inside our artistic endeavors, except for Courtney, who inserted blue-green light stick in her pumpkin to give her "ghost" an eerie glow.

Once everyone had sung "happy birthday" to Laura and had helped themselves to a slice of birthday cake and a cup of steaming spiced cider, we bid our guests adieu and cleaned up the room. Seeds were collected for roasting. Pumpkin innards became dinner for the animals in Soldiers Delight's care. Lights and streamers and carving supplies were all cleaned and put away for next year. Everyone took their carved prizes home where they were bound for front porches to ward off spirits and greet trick-or-treaters.