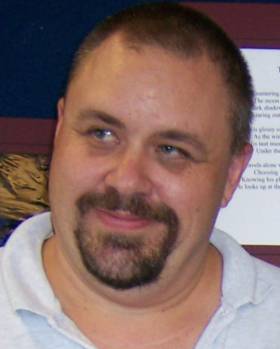 For Dwight Hendricksen, it was all about spending quality time with his son, Grant, now 22. Back in 2001, when Grant was nine years old, he was involved with the Junior Ranger program when a call came for volunteers to help the Patapsco Valley State Park naturalists interact with red tailed hawks, barred owls and other majestic raptors in PVSP’s Scales & Tales program at the Maryland state fair. Grant told his dad he wanted to take the training, so they signed up together. And thus, a father-son activity was born, which has since blossomed into a pastime that neither Dwight nor his son could have predicted fourteen years ago.

In the ensuing decade, Dwight and Grant began volunteering with the Scales & Tales animals at the State Fair and other exhibits. Dwight, alongside his son, also volunteered at the Scales & Tales aviary, located near the visitor center at the Soldiers Delight Natural Environment Area in Owings Mills, where both men performed animal care and feeding of the reptiles, raptors, amphibians and other wildlife housed there. Most of these aviary inhabitants have sustained life-threatening injuries, typically caused by car strikes from people littering, and would not survive if released back into the wild. Once rehabilitated, they spend the rest of their lives as ambassadors in PVSP’s Scale & Tales program, visiting schools and other public venues to help spread the word about littering and give students knowledge of and better appreciation for nature and wildlife.

Through the years, one volunteer opportunity led to another, and by 2008 Dwight was devoting two weekend days every month during winter to help eradicate invasive vegetation from the historic serpentine barrens at Soldiers Delight NEA as part of the Serpentine Ecosystem Restoration Project, or SERP. It was there that Dwight met Laura Van Scoyoc, a devoted conservationist who serves on the board of Soldiers Delight Conservation, Inc., the Friends group for the protected wildland. In 2009, Laura invited Dwight to attend an SDCI board meeting, saying that her group was in need of more members. Dwight attended a meeting and listened to the important issues about conservation and restoration of the unique habitat that were being discussed. He knew he wanted to be a part of the discussion. Later the same year, Dwight was voted onto the board.

In addition to his membership on the SDCI board of directors, Dwight continues to volunteer with the Scales & Tales animals and the SERP group out on the barrens in winter. He has also obtained an intense 40-hour firefighting certification needed to assist with twice-yearly controlled burns at Soldiers Delight, necessary for invasives control and germination of some of the area’s native grasses. But that’s not all. Dwight also helps out with managed deer hunts at Soldiers Delight, held each January to curtail the extreme damage from browsing to the area’s rare and endangered native plants by massive overpopulations of white-tailed deer.

Now that Grant is an adult, he and his dad don’t do quite as much together as they once did. Dwight’s job as project manager for an online school calls for much interstate travel which keeps him from attending as many board functions as he’d like. Nevertheless, when the need arises, the directors can count on Dwight to volunteer his time whenever it’s required. And who knows? One day Grant may follow in his father’s footsteps and express an interest in joining the SDCI board of directors – creating yet another opportunity for quality father-son time.